Earlier this year, I had a chance to get my hands on a Nokia e71x on the AT&T Wireless network. It was refreshing to take a break from my Windows Mobile Samsung Blackjack for a month to see how Nokia approaches the smartphone device.

While I had it, it performed nicely. Although there were a couple of features that I felt were missing from my first test drive with the phone that I noted in my original review, some of them became non-issues as I used the phone more regularly.

Nokia phones are the dominant force in the global mobile phone market and are also the leaders in terms of sales when it comes to the more specialized and growing smartphone market.

The E71 was released earlier in 2009 and is packed full of features that accompanies its competitive pricing (selling for $0.00 currently). It is aimed at the business phone market that is currently dominated by BlackBerry and should be considered as a true alternative to those who want something a little different.

The E71x is a slim and subtly designed phone and it is able to claim the title of being the slimmest phone to feature a full QWERTY keypad. It is constructed with a steel frame which means that it feels durable and will handle the rigours of frequent use. The E71x has a large screen that coupled with the easy to use keypad makes it ideal for typing long emails and browsing the internet. Because it uses Nokia’s famous Symbian operating system it is compatible with a wide range of useful business applications and you can always buy additional apps as and when you need them. This includes support for all of the most common email services including Microsoft exchange.

The E71x comes with a deliberately small amount of onboard storage. This is designed to encourage owners to buy their own micro SD memory card. The E71x can support memory cards of up to 8GB in size and with the 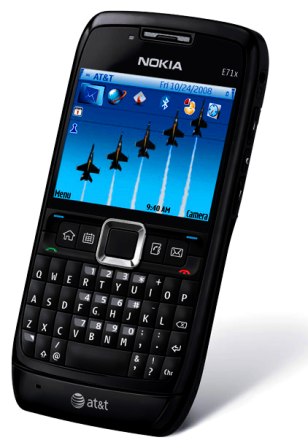 low price of such modules it is something most people will buy almost immediately. The E71x also has the necessary modern connectivity types to help it stay competitive. That means there is built in GPS satellite navigation software that can be used to pin point your location on a global scale. There is also Bluetooth connectivity for use with wireless headsets for making those all important calls while driving. For web browsing while on the move you can use the Wi-Fi connectivity or the 3G networking technology for smooth surfing and fast downloads.

The E71x does not claim to be a multimedia powerhouse, but it has surprisingly ample support for most audio and video file types. The 2.3 inch screen will not be great for watching a whole film on, but for streaming video clips or shorter shows it is absolutely fine. There is also a 3.2 mega pixel camera with built in flash which you can use to take photos or shoot video. Again, though the E71x is far from being as good as dedicated camera phones, for the price it is hard to fault the amount of usability you are being offered. This is one of the many Nokia mobile phones that demonstrate just why Nokia have managed to capture such a large proportion of the global market. As a business phone and a smartphone the E71x performs extremely well. Though it lacks the faddish touch screen interfaces offered by competitors it is a triumph of user friendliness and value for money.

TweetShare If you found this post valuable, would you help others find it by sharing it?
2nd Look at the Nokia e71x Smart Phone
Powered by Zippy Courses