Microsoft is huge on copycatting anything that seems to be working elsewhere.Â  They are known to be that one person that’s always late to the party.Â  Perhaps trying to be fashionably late, many times it’s just a huge embarrassment for Microsoft . . . other times, they are just glad they got in the door before it was too late.

Here’s a classic example of the clone-aholic tendencies of Redmond WA: Windows Mobile smartphone users (like me with my Samsung Blackjack) now have an App Store of their own.Â  Of course, Microsoft is in denial that it is copying Apple’s itunes apps store, so it’s not called the “Windows Mobile App Store” like it should.

Instead, it is branded as the Windows Mobile Marketplace:

The only problem is that while the Blackberry App Store has launched with hundreds and hundreds of apps – over 1,100 games alone, the WM App Store only has about 500 or so apps in total.Â  Nothing to write home about at this point. 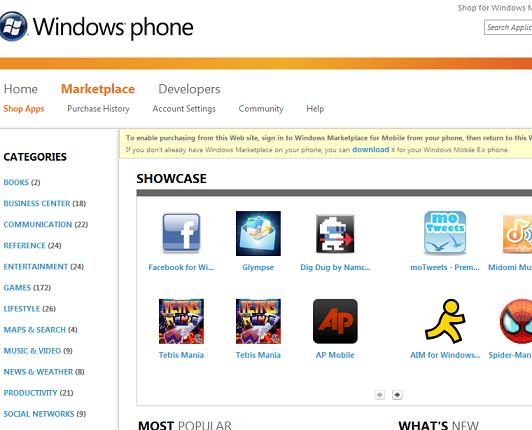 We’ll have to wait until Microsoft figures out how to load up the store with great apps from 3rd party developers as the iPhone app store has done.Â  But in the meantime, there are some neat WM apps like the Facebook, Skyfire browser, MySpace, and other apps which most WM6 users will want to look at and download.

Have you tried the Windows Mobile App Store?Â  What apps have you downloaded so far?Â  Which have been a waste of your time and money?Â  Let us know in the comment section below!

TweetShare If you found this post valuable, would you help others find it by sharing it?
Clone Wars: Windows Mobile App Store
Powered by Zippy Courses