I personally haven’t been pressed to figure out ways to get free calling on my iPhone 4. Largely since I’ve been slowly working away at an AT&T Wireless Rollover balance of over 3,500 minutes I currently have.

Plus, when you call anyone else with an iPhone, you’re basically going to get a free call since they are covered under the mobile-to-mobile free minutes part of the cell plan. (Although with the iPhone rolling out with Verizon this year, you won’t be as confident of your free minutes.)

So for free audio calls, Skype for iPhone just hasn’t been of interest to me thus far. I know others that are big Skypers on the pc too, so it makes sense for them to download and use it with their pre-existing Skype user network. But for me – for regular audio calling, I’d just as soon use my cell plan minutes.

Video calling is a different story — Apple’s Facetime has been a huge hit with me.

It is a great way to connect with the kids when we are away from each other. I’ve even most recently Facetimed home when I was in our local ShopRite grocery picking up some milk since there’s free WiFi in many parts of town. The novelty is still there for video calling with friends and family, even though I regularly video conference for business and with my social media network of associates. 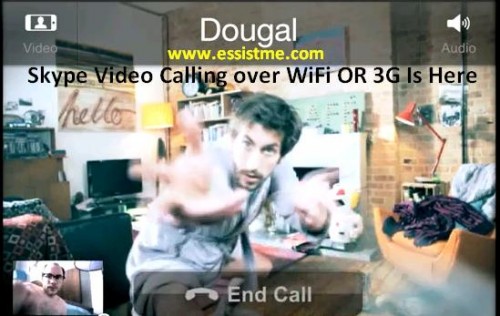 But now, it looks like you don’t have to be connected to wifi at all. 3G video calling is a reality now, thanks to Skype. The only snag here is similar to Facetime – the other party needs the same thing on their phone or PC. Of course the network effect is in play here as more people within your network use Skype, the more useful and utilized it will become.

Overall, Skype is probably going to be a game changer, unless Apple begins to allow 3rd party apps to Facetime on devices other than the iPhone/iPod Touch and on Macs.

Check out the cheeky promo video that Skype just put out to announce their Skype Video Calling on the iPhone:

BTW, there *IS* a difference between Facetime and Skype Video on the iPhone/iPod Touch. You can see in this video comparison of the two, that Facetime is much clearer, less jumpy in video and overall a better experience. But Skype does two things that might let it become the default choice for many people — 1) It works over 3G, where Facetime requires WiFi on both sides. 2) You can make Skype video and audio calls with PC users in addition to Mac users. Facetime is Mac only at this point.

Go get Skype for iPhone now — and let me know what you think about the new video calling feature. Leave a comment below!

TweetShare If you found this post valuable, would you help others find it by sharing it?
Skype 3G and WiFi Calling on the iPhone for Regular & Video Calls
Powered by Zippy Courses