The march goes on.

Social networks are continuously trying to climb the social ladder by upping the ante almost weekly.Â  Any regular user has experienced the social media sites’ constant redesigning of their interfaces in hopes of getting us users to use their sites more than the competitor sites as well as just use them more often period.

Facebook is no different. They just changed the “news feed” display by adding the “live” option (which no one I know has ever fully understood). Â  FB has also changed navigation and various other things along the way as expected.

“Welcome to your new, simplified home page.” [EMPHASIS MINE] 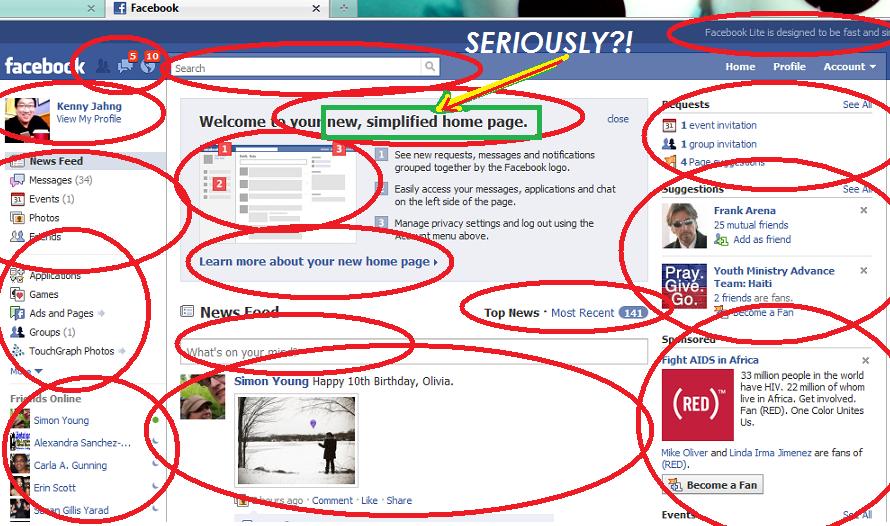 I nearly had a heart attack when I saw that “new, simplified home page” on Facebook. Â  It was just plain scary!!

Why they do things like this?Â  Doesn’t anyone over there do any sort of user testing before they push out new features and functionality to the entire world?

I’m sitting here wondering, just where in the world on this page do you want me to look first?

Ironically, there’s a “Facebook Lite” promo link at the top of the page trying to push a “fast and simple” version of Facebook.

I know, I know, these changes are happening because Facebook wants to compete with Gmail and email in general.Â  The Google generation doesn’t email their friends anymore anyway. . .unless you want to attach and send a file (hint to FB coders, this is one new feature which would make sense).

TweetShare If you found this post valuable, would you help others find it by sharing it?
Virtual Insanity: Facebook Edition
Powered by Zippy Courses